The 25th edition of UNEP’s Foresight Brief enhances our understanding of the interwoven relationships and the subsequent fluxes of energy between plants, soils and water on the ground, as well as in and with the atmosphere. It explains how these can help mitigate climate change, while at the same time creating a resilient ecosystem. 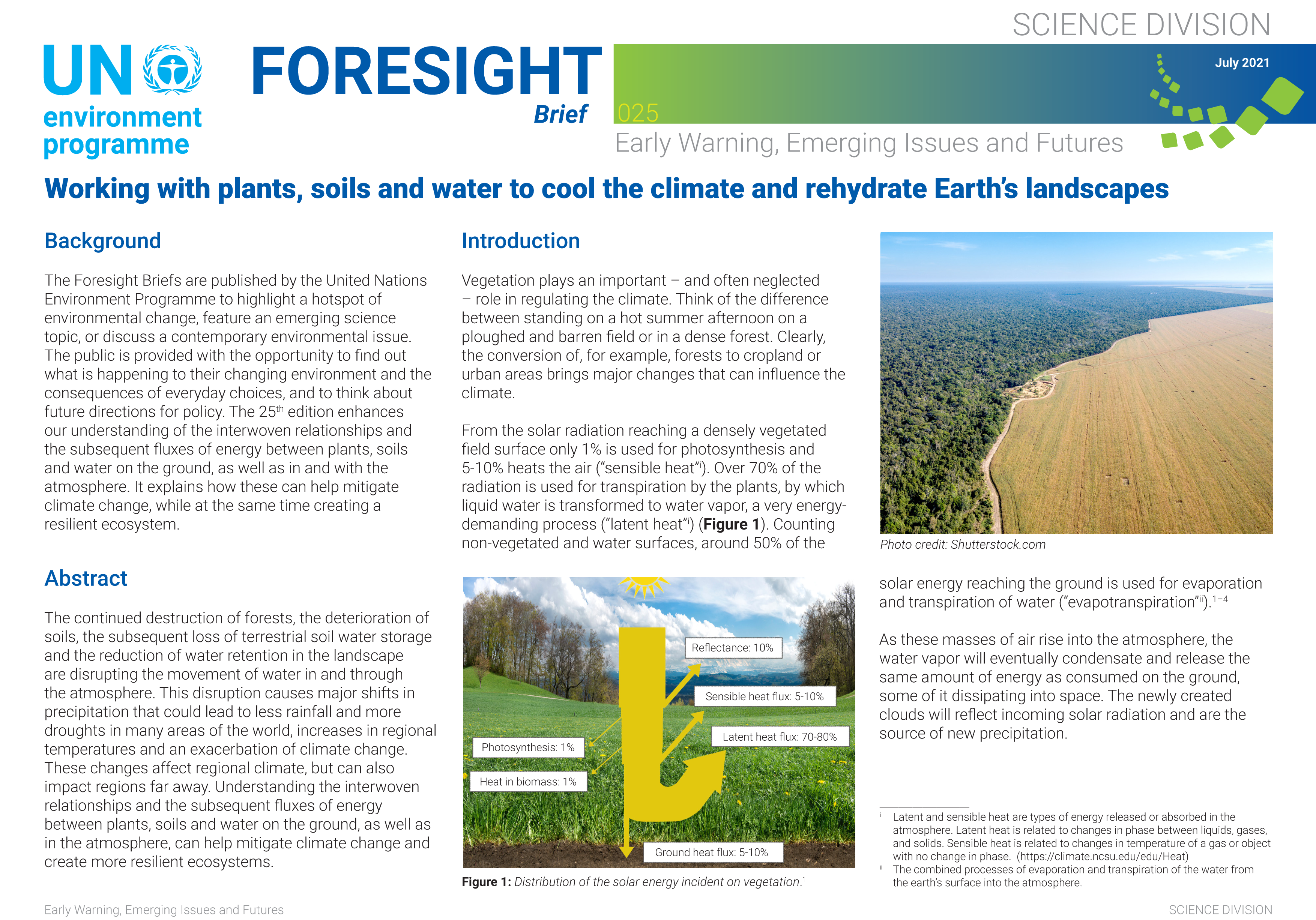 Since its initiation the Ilisu Dam and Hydroelectric Power Plant Project is highly controversial both at the ground at the Tigris in the Kurdistan region of the Republic of Turkey and in whole basin up to the Mesopotamian Marshes in South Iraq. Recently the Turkish government announced recently that on 10th June 2019 it will start filling the Ilisu Dam reservoir which is nearing completion. This paper gives an overview about the expected grave social, cultural and ecological impacts and the ongoing counter struggles at local, regional and international level which have the hope to stop it.

The Ilisu Project on the river Tigris is the largest hydroelectric power plant and/or dam planned or under construction by the Turkish government. Initiated in 1997, it is a key part of the large scale ‘Southeastern Anatolia Project’ (GAP) in the mainly Kurdish populated Southeast of the Turkish state. GAP consists of 22 large dams with a capacity of 8000 MW and the planned irrigation of 1.8 Mio. Ha. land. The 1,200 MW and 2 Billion Ilisu Euro project with a height of 138 m would flood the Tigris on a stretch of 136 km and an area of 313 km².

The first Ilisu Consortium collapsed in 2002, but was revived in 2005 with the involvement of German, Swiss and Austrian companies which applied for export credit guarantees in their states. In the following years, the involvement of European companies, banks and governments was highly contested until, in July 2009, the Export Credit Agencies (ECA) of Germany, Austria and Switzerland made an unprecedented step by suspending the credit guarantees due to the Turkish failure to comply with required environmental, social and cultural heritage conditions accompanied by strong international protests. However, the Turkish government organized new financing with loans from three Turkish banks and started the construction of the project in March 2010. In the Ilisu consortium remained only one international company: Andritz from Austria.

Impacts on people, culture and nature

According to official statements in 2005, the Ilisu dam reservoir would completely or partially flood 199 villages and the ancient city of Hasankeyf, with a population of 55,000 people. 23,000 people are not counted because they were forced to leave in the 90s when 80 of the affected villages have been evacuated forcibly by the Turkish Army. Additionally up to 3,000 nomadic families, who use the Tigris River, would suffer directly. Thus in fact around 100.000 people are affected. The vast majority is Kurdish, while half Hasankeyf’s population is Arabic. Until the Armenian-Syriac genocide during World War 1 an important part of Hasankeyf and some villages were Syriac. More than 40% of the affected people do not own land and do not get any compensation; they will loose almost everything. For the other small villagers the expropriation rate is low and there is neither proper land for resettlement nor are there other income compensation measures that have been set in place as yet. The affected people face the loss of their livelihoods and culture, the disruption of their homeland and family structures and a future in poverty in cities. Considering that Kurds – actually all non-Turks – are still facing systematic assimilation by a nationalist Turkish state policy, the Ilisu Project will intensify assimilation of the Kurds. The Turkish government’s centralist behavior has no space for any participation for the affected people, civil organizations and affected municipalities. Everything has been planned and implemented in Ankara by the DSI (State Water Works), the project owner on behalf of the Turkish government. At local/regional level only some big land owners and some local companies would benefit financially.

The Ilisu Project is situated in Upper Mesopotamia, the ‘cradle of civilization’ where the first human settlements developed. The Ilisu Project would affect more than 400 archaeological sites – the whole affected area has not yet been surveyed completely. To date only in around 20 sites excavations have been done. The 12,000 year old town of Hasankeyf that uniquely merges a rich and historic cultural heritage with an important biologically diverse environment would be flooded by the Ilisu reservoir. Also due to the fact that it has been inhabited uninterruptedly it is why Hasankeyf has became the symbol of the struggle against the Ilisu Project. Hasankeyf was on the Silk Road for centuries, one of the larger regional cities in medieval times and includes traces of 20 different eastern and western cultures, several hundreds of monuments and up to 5,500 human-made caves. It is a large area and needs careful excavation for dozens of years. Hasankeyf and the surrounding Tigris Valley fulfill nine out of ten UNESCO world heritage criteria according to independent expert research, but no application to UNESCO has been done by the Turkish government. Rather the fact that Hasankeyf is declared a First Degree Archaeological Site by Turkey’s Supreme Board of Monuments in 1978, is used by the government to impede any urban development or investment for planned and sustainable tourism. While in the 70s up to 10,000 people lived in Hasankeyf, today Hasankeyf is with 3000 inhabitants is officially one of the poorest districts of Turkey.

The Ilisu Project is a large intervention into the geography of Upper Mesopotamia and would flood up to 400 km of precious riverine habitat which is home for many species like the endangered Euphrates Soft-Shelled Turtle. The Tigris river stretches are ecologically still very valuable and very crucial for the whole ecology of the region. For example Hasankeyf is home to at least 123 birds. The regional climate would also change as it happened with the Euphrates River Basin where after the construction of five large dams also the traditional agriculture experienced some serious negative impacts. As only some researches have been done in the Tigris Valley up to the present time we do not know really what would be lost. The water quality of the reservoir is expected to be extremely low, leading to massive fish extermination, and threatening people’s health. Further downstream the decreased water flow will have a negative effect upon the Mesopotamian Marshes in Iraq – the largest wetland of the Middle East and an UNESCO World Heritage Site.

Syria and particularly Iraq rely on the water of the Tigris River, which is the vital source for agriculture and water supply to urban centres for thousands of years. International conventions (like 1997 UN Convention on the Law of Non-Navigable Use of International Watercourses) and law require mutual agreements between Turkey, Iraq and Syria; but Turkey has not signed them. Rather Turkey imposes bilateral agreements like it is the case with Iraqi government in these years. The needs of people and nature are not considered and it gives no guarantee that Turkey will not use water as a weapon against the people of Iraq.

How Turkey uses dams as a weapon can be determined currently in the case of Democratic Federation of Northeast Syria which has been liberated by the Syrian Democratic Forces (SDF) during the ongoing Syrian War. Because Turkey is hostile to Northeast Syria, since 2016 it cuts regularly the Euphrates flow which decreases significantly power generation, irrigation and drinking water supply. Thus Turkey violates a bilateral Turkish-Syrian agreement from 1987 in which it committed to release at least 500 m3 /s at the border.

In recent decades, there has been frequent discussion of the “correct” way to organise and manage municipal water supply and sanitation. This discussion has been supplemented by a number of scientific studies and various political initiatives (e.g. regarding competition and procurement law).

Around fifteen years ago, a comparison of water management systems in Europe was produced by Schönbäck et al. (2003), investigating municipal water supply and sanitation systems using a variety of criteria and indicators.

Since this study, there have been developments both with regards to further market liberalisation and privatisation as well as a rise in re-municipalising public utilities as part of public infrastructure.

The current study also presents a comprehensive comparison of six selected Europe an systems (Germany, England/Wales, France, Austria, Portugal and Hungary). Its purpose is to analyse water management systems and address the questions of whether one particular system for organising these systems should be favoured over any other in order to improve sustainability (from an environmental, economic and social standpoint) and, if so, which criteria or indicators should form the basis of such a policy.

Based on complaints registered on the Coordination Eau Ile de France and Fondation France Libertés water supply disconnections and disconnection threats complaints platform over the period 2014 to March 2017.

SYNTHESIS OF THE STUDY’S KEY FINDINGS