In 1999, the Federal State of Berlin was facing the same problems as many other underfinanced cities and regions in Europe. It had debts of around € 34.8 billion. The administration in Berlin had only one solution to this problem: it had to save money and privatize public services. The Maastricht Treaty was cited in justification of this political course of action, as it required EU Member States to “consolidate” their budgets. This policy of privatization, generally known as PPP (Public-Private Partnership), was pushed through against the wishes of the population. Between 1994 and 2007, public property worth € 13.7 billion was sold off in Berlin. Today, Berlin’s debt level amounts to € 62 billion. Policy then was based on the principle of “Private can do everything better”. There was thus no political power left that could give expression to the citizens’ wishes.

Then direct democracy stepped into the gap

2004 - Inspired by the success of the Bolivian people in their fight against water privatization in Cochabamba (Bolivia) in 2000, a group of Attac Berlin started to critically follow up the arguments put forward during the part-privatization of the Berliner Wasserbetriebe (BWB). The reason:

1999 - Berlin’s Senate had concluded a secret contract with the RWE and Veolia that could not be terminated for at least 30 years. In October 1999, the Berlin Constitutional Court declared that the credit spread of 2% contained in the law was unconstitutional. Nevertheless, the state guaranteed exactly this high profit for the private companies in their secret contract. The part-privatization of BWB took the form of a complicated holding structure in which Veolia and RWE together took over 49.9%, each having equal shares. This was the largest municipal PPP project ever undertaken at that date.

2004 - First sharp rise in Berlin’s water price (15.4%), fierce debates in the city and within the population about the administration’s privatization policy.

2006 - The “Berliner Wassertisch” Berlin Water Table) was initiated at an information event run by Attac Berlin. The Berliners were inspired by the Venezuelan water table groups. The Berliner Wassertisch resolved to campaign for a popular referendum on disclosure of the secret contracts (it was not yet possible at that time to have a referendum on the remunicipalization of BWB - the legal position has since changed).

2007-2008 - 1st stage: Petition for a popular initiative: “No more secret contracts! Berliners want their water back”. In the 6 months up to January 2008, 39,679 Berliners submitted valid signatures. Just 20,000 were actually needed. The Berlin Senate (SPD/Left Party (Die Linke)) attempted to obstruct the process on the grounds of alleged unconstitutionality. 5 representatives of the Berliner Wassertisch lodged an appeal against this decision with the Berlin Constitutional Court on 18.4.2008.

2009 - The judgment of the Constitutional Court of the Federal State of Berlin on 6.10.2009 in favour of the Wassertisch cleared the way to progress the popular initiative to the 2nd stage. The judgment is remarkable. It states that for the public sector, public law continues to take priority, even in the event of partial sale to private bodies, and that civil law, which is generally used to justify the confidentiality of contracts (operational and commercial secrets), is intended primarily for the protection of private individuals. Elsewhere the judges stress several times the special nature of public services as assets that need to be protected. As the supply of drinking water and removal of sewerage are at the very heart of public services, the State may not weasel its way out of the public law by means of contracts framed under civil law.

2011 - The crucial hurdle of the 3rd step was successfully cleared: On 13.2.2011, 666,235 Berliners voted in favour of the proposition “Berliners want their water back” and its aim, namely the legal disclosure of all secret contracts. A popular referendum was thus won for the first time ever in Berlin.

2012 - A parliamentary “Special Committee on Water Contracts” was set up on the basis of §3 of the “popular law”. However, after it had been sitting for one year, the governing coalition (SPD/CDU), contrary to reality and seconded by the supposedly objective Parliamentary Scientific Service, confirmed that everything had taken place properly and correctly when the contract was concluded in 1999. The scandalous contract was thus not subjected to judicial scrutiny by the Senate. Rather than reversal of the contract as requested by the Wassertisch, which would have been cheaper, the only option then was an expensive buy-back. The Parliament approved a security of € 1.4 billion for this purpose. The German Federal Cartel Office issued an order against Berliner Wasserbetriebe for improperly excessive drinking water prices. This was confirmed by the Regional Appeal Court on 24.2.14. The Federal Cartel Office thus won over the Berlin Senate, which now has a 100% stake in the running of the water company. Drinking water prices will have to be reduced by around 17% annually. The investigation into sewerage prices has yet to report. Buy-back of RWE’s shares for € 618 million.

29.11.13 - The “Berliner Wasserrat” (Berlin Water Assambly) is established as an open forum for everyone who wishes to become involved in the planning and implementation of this new Berliner Wasserbetriebe under the citizens’ control. 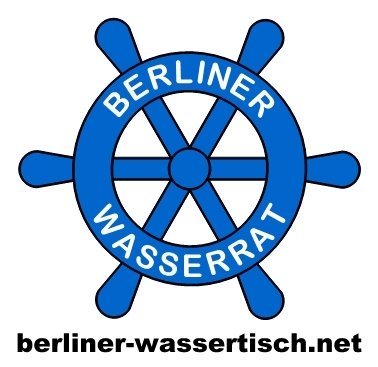