The following declaration was written by Korean and global water justice groups gathered at the Daegu Alternative Water Forum.

From April 12-14, Korean civil society organizations hosted an Alternative Water Forum in Daegu in opposition to the corporate-led World Water Forum 7 being held in the same city. One of the key concerns for the Korean Government Employees Union – the main organizers of the event —  was the involvement of French multinational water corporation, Veolia.  KGEU argues that Veolia used the corporate World Water Forum to cement its interests in the region (read more). The KGEU is fighting to keep water public in Korea and represents 140,000 public sector employees but has been refused legal status by the Korean government.

2015 Daegu Gyoungbuk declaration on the Human right to water

Water is life and a human right.
We declare our commitment to strong public water services for all!

In commemoration of the five-year anniversary of the UN resolution 64/292 regarding the Human right to water and sanitation, in celebration of the 15-year anniversary of the  Cochabamba struggle against water privatization, and following in the footsteps of global water justice struggles against the corporate World Water Forum in Japan in 2003, Mexico in 2006, Turkey in 2009, France in 2012, we the Daegu 2015 Alternative World Water Forum  declare:

1. The World Water Forum is illegitimate: It is a corporate trade fair aimed at promoting market access to multinational water corporations in the water and sanitation sector. It gives corporations privileged access to decision-makers behind closed doors and should not be used as a space to advance policies to solve the global water crisis. Public water policies must be discussed democratically in consultation with the public and with impacted communities in particular.

2. Water and sanitation are a human right: The greedy and profit seeking practices of multinational water corporations threaten the universal human right to water and sanitation: the privatisation of water in various forms has led to blatant violations of this right through tariff hikes, water quality degradation, inefficiency, corruption and destruction of the environment. The human right to water is also violated through the destruction of watersheds and commodification of water resources in the form of large dams and infrastructure, water diversions, extractive industries, hydraulic fracturing and other dirty industries.

3. Water is part of the commons: Water supply and sewerage must publicly owned and managed in recognition of water as a vital part of the commons. We will continue to work together to stop privatisation and to remunicipalise private water and sanitation systems. We call on the public sector – local and state governments – to improve the social and ecological management of water quality and water resources and to solve dispute between locals where necessary.  Public and community management must be strengthened by ensuring transparency, accountability, access to information and public participation in decision-making. We urge the Korean government to promote policies that strengthen public water and sanitation services and demand an end to all negotiations with the French multinational corporation, Veolia.

5. We will continue to support each other’s struggles as a global water justice movement. We will strengthen our ties of solidarity in our struggles to stop privatisation and promote quality public water and sanitation services at the community level, the national level and the global level. From Daegu Gyoungbuk, Korea we connect with struggles and victories against privatization around the world. 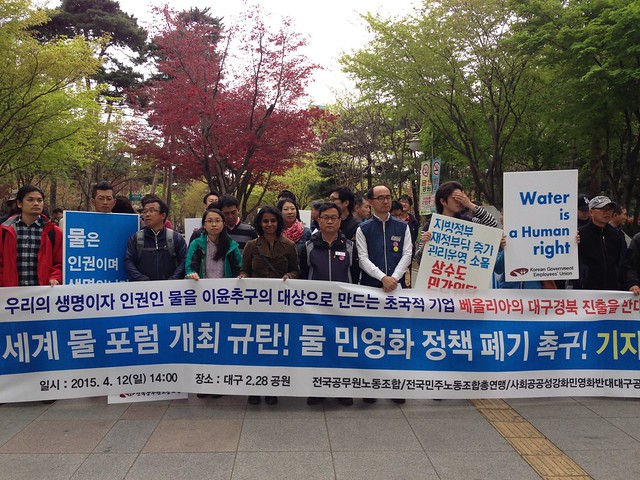