Wetlands are not only reservoirs of biodiversity but are also crucial for the sustainable management of water resources, both in terms of quantity (groundwater recharge) and quality (purification). They mitigate floods and coastal storms and provide water in times of drought, thus limiting the effects of climate change.

However, wetlands are declining all over the world due to multiple anthropogenic pressures (land occupation and soil drainage by intensive agriculture and urbanisation, increased water abstraction, mining, pollution). According to the European Commission, two-thirds of wetlands in Europe have disappeared since the beginning of the 20th century. As the main cause of wetland loss in Europe, their transformation into agricultural land has slowed down in recent years, while urban and tourist developments and the development of transport infrastructures in place of wetlands have increased.

With this in mind, World Wetlands Day 2022 has called for action to preserve existing wetlands and restore those we have degraded where possible.

What about wetlands in Europe?

The Habitats and Birds Directives and the Water Framework Directive are the main pieces of legislation protecting wetlands in Europe. The "Natura 2000" network and the integration of wetlands into river basin management plans are supposed to help ensure their future preservation. However, wetlands continue to disappear in all European countries. The Marais Poitevin (France) and the Ricarda (Catalonia) are two examples of wetlands at risk of disappearing.

Threat to the Marais Poitevin, 2nd largest wetland in France

For the past 4 years, thousands of people have been protesting against the environmental degradation and abusive freshwater withdrawals from the 100,000 ha of the Marais Poitevin and its maritime facade (Baie de l'Aiguillon and the Perthuis Charentais).

A former gulf filled with silt, the Marais Poitevin has been the subject of successive hydraulic developments (polders and drainage) for a thousand years but, since 1980-90, its small watershed of 6,000 km², made up of 3 minor rivers (Lay, Vendée, Sèvre niortaise), increasingly subject to recurrent droughts or floods (climate change), has been overexploited by the withdrawal of water from the aquifers for the irrigation of maize in intensive agriculture for export and now for methanisation. However, it is these karstic aquifers on the peripheral plains that feed the springs on the edge of the marsh and maintain freshwater levels thanks to coordinated management of the works that are now under attack.

Faced with the degradation of wetlands, biodiversity, water quality and levels, and challenged for 30 years by the population because of the non-respect of European environmental directives, the State was obliged to create a small special administration, the Etablissement Public du Marais Poitevin, after the suspension of the label of Regional Natural Park, a label regained since then thanks to administrative subterfuge.

But in its current support for agricultural productivism, the State does not provide any serious means for better water management and, on the contrary, grants pumping derogations and finances the installation of "bassines", large plastic-coated surface reservoirs of up to 20 ha, to replace summer pumping in the water table by winter pumping with storage. These very costly investments, 70% of which are financed by the Water Agency and the user of the public service, are reserved for a few large industrial farmers. This is an injustice and a waste of public money.

The management of the "bassines" in the Vendée and Charente-Maritime (where they have been illegal for 12 years) and their ongoing installation in the Deux-Sèvres show numerous failures (pollution, failure to respect the levels and rhythms of groundwater recharge, drying up of rivers, impact on Natura 2000 wetlands, including the alkaline peat bogs that are so rare) and disproportionate costs that contrast with the optimistic display of the administration. There is clearly deception and perpetuation of environmental damage without reversing the mode of water management in the Marais Poitevin towards greater sustainability as evidenced by the dry state of the Mignon and Autizes rivers.

At the same time, the coordinated inter-departmental management of the Marais Mouillés is being undermined by attempts to individualise this management at departmental level, which risks creating hydraulic anomy and more serious environmental damage in this fragile area. 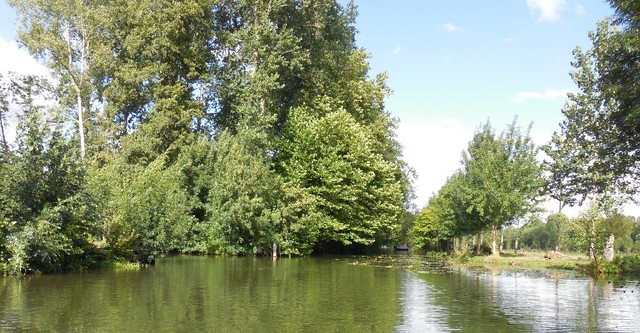 Metals birds in the Ricarda ?

The Llobregat Delta is an area of great value for the Baix Llobregat, the Metropolitan Area of Barcelona and Catalonia. Transport, industrial and urban infrastructures coexist in a delicate balance, as well as highly valuable agricultural and natural spaces. The Ricarda is a very important part of the ecological functioning of the delta, a natural area of pine forests, wetlands and lagoon inhabited by 43 species included in the directive of protected birds, orchids (up to 23 different types), fish and reptiles. In addition, this wetland plays a key role in hydrological regulation, such as the maintenance of strategic aquifers and the mitigation of floods.

In 1994, in order to manage development projects in this area, an agreement was established between actors of the territory and the administration called Pla Delta. Today, the intention of Aena (Aeropuertos Españoles y Navegación Aérea) to extend the third runway of El Prat airport goes against this consensus and puts in light the irresponsibility of this company: already in January 2001 the European Commission issued a very hard report for the serious infractions and environmental deterioration perpetrated in El Prat airport since 2006, where it should place a biological corridor AENA placed car parks. 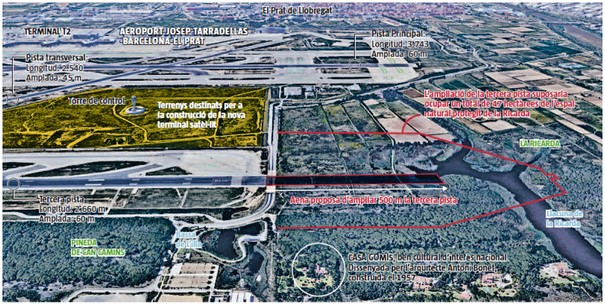 The Llobregat Delta cannot sustain even one more inch of infrastructure expansion without its ecological and social viability being irremediably compromised. Local society is very aware of the importance of stopping this barbarism and thanks to a great coordination effort of some 300 social, neighbourhood and environmental organisations, a mobilisation was organised in which more than 10,000 people from all over Catalonia came to the centre of Barcelona.

For the time being, the project has been paralysed and Aena announced in September 2021 that the airport expansion would not take place before 2026. Barcelona City Council presented up to five possible alternatives, ranging from changing the flight configuration to combining El Prat airport with Girona and Reus airports. However, there is no option with zero environmental cost and it is obvious that we need a change in the economic model that sustains unlimited growth at the expense of the health and future of all of us.

Ongoing development projects on wetlands continue to prioritise short-term economic interests over the long-term social and environmental benefits of wetland preservation and restoration. Recognising that wetland compensation is neither possible nor desirable for most projects would help reverse this trend.